I don't doubt anyone's recollection from back in the day, I'm just trying to track down primary sources (as I try to always do).

I've not yet seen any advertising that links it to the Other Ventures series. It's only that odd manual (linked earlier) that has a single reference, in the loading section, to Other Ventures. Despite that, I think that's a fairly strong case for linking the game to 'Other Ventures' but it does still feel a bit odd because the compilation it supposedly came with does not even list Saigon on the box. It's almost like Saigon was thrown into the compilation last minute (or later on) as a freebie.

If we were to add it to the series, is there a reference anywhere that denotes Saigon as 'Other Ventures #5'?

Because, as I said earlier, Dog Star Adventure was officially Other Ventures #5, as clearly shown on the packaging... 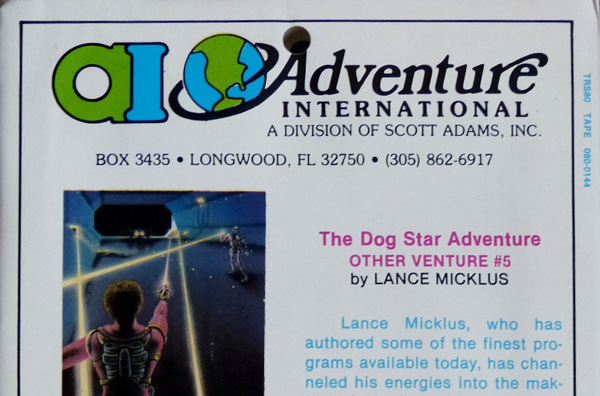 So would Saigon be #6... or might there potentially be other games that slot in earlier? It's obviously a game that was "another venture" for Infocom, but was it actually an 'Other Venture''? If Adventure International had abandoned the use of the series 'Other Ventures' by the time Saigon was released, then did they consider the series to have still been ongoing?

The CASA category that you're talking about is "Related", not "Series". Saigon was definitely related to the other Jyym Pearson games in the Other Venture series. From its first release in Adventure International catalog vol. 3 no. 2 to vol. 3 no. 5 (the last one that I've seen), it was grouped together with the other Jyym Pearson games. Same publisher, same author, same programming language, same style.
Top

i don't know much about oldest TRS-80 and older ATARI versions, but it seems #2 Crowley Manor, #3 Escape from Traam, #4 Earthquake and #5 Saigon are all released as Text only version (for TRS and ATARI 16KB system) in advance in 1981. only Apple ][ version got 108 colors Graphic+Text version (needs 48KB), and #2 and #3 have been released in the same year.

i think Garry nailed the spot. the staff members.
the tag of Jyym Pearson and Norm Sailer (who coded graphic routine) are always credited on 48KB version.
and the graphic artist whose name i don't know but his/her work is distinct and the style is the same from #2 to #5 (which i love). also, the artwork seems to be done with same tool, Penguin Software's "The Complete Graphic System".
it is likely #2 to #5 (i don't know about #1) have been on sequential production line by contract package with Jyym's team but only TRS-80 seems to be different.

i think its time to ask directly to Scott Adams about this subject and i have sent a mail to msadams.com.
Top

The Atari disk version had graphics. That's how I played it.

In a recent interview with Scott Adams in The Classic Adventurer issue 5, the interviewer said "A total of five games were released via "Other Ventures" - John Rausch's Classic Adventure and Jyym Pearson and Norman Sailer's Crowley Manor, Escape from Traam, San Fransisco 1906 and Saigon: The Final Days." Scott Adams did not correct him and say that Saigon was not in the series.

Scott Adams is a regular on the "8-bit text adventures" group on Facebook. You could ask him there.
Top

Mark adds the filler text separately from the interview so that shouldn't be taken as any indication of anything.

But, yes, Scott is easily contactable so asking him might well be a good idea.

Wonders never cease. He also lists the Questrobe series in the 50s.

The same web site lists the Jyym Pearson games under 'Other Ventures'. Saigon:The Final Days is unnumbered. Death Planet is not included. Zossed in Space is listed separately, even though it is Other Venture #0 in the Adventure International catalogues.
Top

don't you even think both could be #5 in the process of continual promotion ?
such things are often happened in the past and it can be seen in other industory even today. like change of order, catalog description, and title. even release date could have been changed later due to condition change of internal/distributor/publisher/whatever.
and of course, there might have been mishappens during promotion.

you are saying as if just one evidence has been discovered, its enough to deny every other possible occasion, even facts.
and "whatever he says" ?, "can't be #5" ? are you serious ? you are not the man who actually made the decision.
"already taken" as well might be the thing within afterward tale like i said. it won't necessarily apply to the case non-TRS version had Saigon in #5.
that's too much defensive attitude but quite illogical and just showing contradiction of yourself by judging different platforms with one platform's affair.

even if Dogstar was confirmed as #5 officially in the end at least for TRS-80, i already asked in my mail if Saigon "WAS" in the series or not. this reveals older form of the series which had been followed and overwritten by afterward promotion.

and i think there should be physical evidence as well. its not the one that you showed, and it should hold at least different contents with it and looks like missing part for now, but once its confirmed, mine and Garry's memories as well would be right, then let's see what you say. btw, i already have an answer for it.

anyway, if i diddn't receive reply, i will try SNS next.
Top

At the time, I was unaware that there was an adventure called Dog Planet, as TRS-80 adventures were not advertised in Atari magazines. Dog Planet is actually Dog Star Adventure written in BASIC by Lance Micklus and published for the TRS-80 by another publisher many years before the Adventure International release and published as the first-ever type-in adventure in SoftSide, as well as in The Captain 80 book of BASIC adventures and Computer & Video Games and subject of several unofficial ports for the C64.
Top

that's a quite knowledge. i can understand how eariest form of computer game industory were. but not knowing such details.

btw, its a bit off topic, but with seeing around Saigon so far, i got a question.

there are 2 types of system

my question is, did Apple ][ version had been actually released ? naturally it should be type 2. graphic+text version. (i guess possible release date is between 1982 and 1984, since #4 Earthquake was in 1982)

why i ask this is, Saigon was one of missing part of my collection.
i actually had gone for hunt with checking ads/magazine, but ended in getting #2 to #4.

contents wise ATARI version was more than enough to make my video, (actually better than Apple ][ version except for dim and fewer basic colors) but just being curious about existence of Apple ][ version.

ahh.... i should have asked this as well to Mr.Scott.
and forgot about trying text only version with my WT memo to see how original poster's question goes.
Top

The same web site lists the Jyym Pearson games under 'Other Ventures'. Saigon:The Final Days is unnumbered. Death Planet is not included. Zossed in Space is listed separately, even though it is Other Venture #0 in the Adventure International catalogues.

Yeah, the numbering systems a an absolute mess. Various websites disagree... which is one of the reasons why I'm trying to get some primary sources so we can get things right here, or at least provide an accurate commentary and give the reader some background information. There's too much copying and pasting between sites, and not enough research.

All the comments in this thread so far have been really useful and have opened up some interesting lines of research. I've learnt a lot already. I have no real interest in Adventure International games (but slightly more interest in them than I do in Infocom!

i have done playthrough of TRS-80 version as well.
there sure was a "MAP" thing (this is not exact name) in the version.
and i can say its kinda most important item.
it implies vital info to solve the game but not that serious one if the player was... erm, the type of Merry (famous mischievous hobbit of Shire)
Top

Good to see the research going on. After being in touch with a lot of authors from back in the day, I can safely say that recollections of what went down 30-35-40 years ago are hazy at best - and understandably so. So I'm happy to see that you are actively seeking out physical evidence, even if it might turn out to be contradictory.


Garry wrote: ↑
Sat Nov 16, 2019 5:18 am
Incidentally, this is no different to a lot of other games that CASA has lumped together into a series, even though the publishers never referred to them as such.

The majority of games which we've collected into groups are either
1. Games with an official series name (such as Mysterious Adventures)
2. Games that either in name or story-wise are related to each other (such as Behind Closed Doors)
3. Games originating from the same type-in book (such as Adventure Writer's Handbook)
4. Games that are clones of the same title (such as Colossal Cave Adventure/Adventure)

I realise that type 4 is a stretch - neither Crowther nor Woods intended these to be a group, so it's done for ease of use. To my knowledge we don't have many of these types.

But adding a game to a clearly labelled series without said game indicating that it is part of that group (type 1).... I hope we're not doing that. If so, let me know.
Top

luckily i could have received a reply from Mr.Scott.
but he said to see attached pdf (volume3 Issue 5. the last catalog). as the catalog had been published after Other Venture brand has gone, its out of question.
so i re-sent a mail in more intensive way to ask again, with second question - the existence of Apple ][ version.
Top
Post Reply
38 posts