by Moitcho
i got another replies from Mr.Scott. and it was like this:

as for second question about existence of Apple ][ version, i got no answer though.

by Strident
That is a more useful catalogue. It's missing off the Internet Archive. 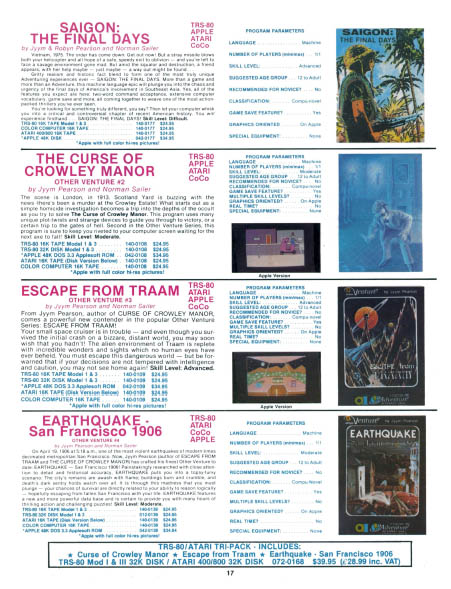 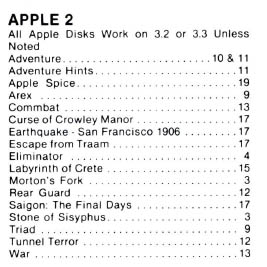 As Scott says, the Saigon page is the same there aside from the fact the Apple ][ version is not listed.

by Moitcho
isn't it clear yet ?
it became rather clearer for me.

the price list of Apple ][ version is which i also have found somewhere while on search.
i see Saigon's name in it but i simply can't confirm since i never saw it so far in real or even on net.
it might be extremely rare and lost, or maybe only on paper but no physical copies. but even if no actual release, still i can't deny the chance of few, some kind of "leaked" version having been spread and taken as legitimate copy.

I can see an argument for adding a "Jyym Pearson" group but, as those games will appear in CASA when clicking on his name, that's probably a little redundant.

by webowl
Adventure-International did not port all of their games to every platform. For example, Interactive Fiction Series #2 and #3 were only on the TRS-80. Maces and Magic #1 ("Balrog") was also only on the TRS-80. Other Venture #1 ("Classic Adventure") was only on the Apple II. The actual catalogs of the period are the best proof of the inclusion of a title in a series. "Saigon: The Final Days" was never included in the Other Venture Series through catalog 3-4, while "Death Planet: A Dog Star Adventure" was always listed as Other Venture #5. The series numbering was not based on computer platforms because many titles of a series were only available on a single computer, and not necessarily the same computer for each title.

Starting with catalog 3-5, the series titles were dropped. There were no more listings for the Interactive Fiction series, "Classic Adventure", or "Death Planet: "Dog Star". The Other Ventures category name was dropped, and games were listed separately with the Pearson titles grouped for reissues and promotions.

"Saigon: The Final Days" was listed in the catalogs as being available for the Apple II. However, it was never available at retail stores in the U.S. It also could not be found in the "fire sale" of Adventure-International's inventory in Seattle when they went bankrupt because I looked there and I had tried for years to buy it. I got no response from Adventure-International by mail in the mid 1980s when I tried to buy it (my brother also had no success in another part of the country). You will also not find any mention of it's availability on the internet for the Apple II. The exact same situation also applies to Crystalware's "Fantasyland 2041 A.D." which was widely advertised in Apple computer magazines of the day as being available for the Apple II, but it never appeared.

Adventure-International may have also discontinued many titles in 1983 because of licensing issues, or other reasons such as competitive titles (e.g. "Microsoft Adventure"), as well as poor sales.

by Strident
Useful information, thanks. I've put a note on the Saigon page about the Apple II version.
All times are UTC+01:00
Page 3 of 3
Powered by phpBB® Forum Software © phpBB Limited
https://www.phpbb.com/